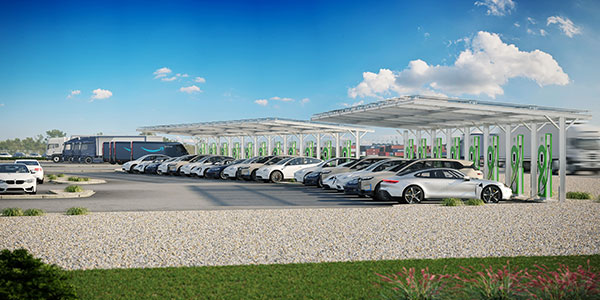 Not so long ago, it was a rare and exciting event to see an electric vehicle (EV) on the road. Today, EVs are a common site in many places around the world and nearly 100 new models are due to hit the showrooms within the next 3 years. Despite this, EVs still currently represent only about 3% of total car sales worldwide and long-haul charging remains an impossibility in most cases. With gas prices rapidly rising, impending bans on the sale of new gasoline-powered vehicles, record environmental pollution concerns, and significant planned EV production, the need for a robust consumer and commercial EV charging infrastructure has never been greater.

One of the leading states in the charge (excuse the pun!) to go electric is Georgia. Ford and Volkswagen’s EV battery supplier, SK Battery America is currently under construction on its second plant in the state and recently, Rivian has committed to building a $5 billion assembly and battery factory in East Atlanta. While battery and vehicle production are key to transitioning to zero emission transport, it cannot happen without a strong charging infrastructure. To complete Georgia’s electric trifecta, the EV charging company, Go-Station, just announced plans to erect what will be one of the largest DC fast EV charging site in the state once fully completed at the Port Fueling Center, adjacent to the Port of Savannah.

“Go-Station’s mega EV charging site in Savannah is all part of our commitment to going electric. It will give Georgians and those passing through our state with an environmentally friendly commuter and transit option and serve to cultivate on-going economic development through job creation and consumer spending in the region,” Nick Palumbo, Alderman District 4 of the City of Savannah, says.

Go-Station will break ground on the new EV site at 5712 Augusta Road in the coming months. “The fueling center’s EV charging site will not only address the growing demand of EVs traveling in the area, but the rapidly expanding population of EV light, medium, and heavy-duty trucks hitting the roads soon. This is a critical EV charging infrastructure development that will enable private and commercial vehicles to complete EV journeys not possible today,” Andrew Hisey, Go-Station’s president and CEO, explains.

The Port of Savannah is home to the largest single-terminal container facility of its kind in North America, comprised of two modern, deep-water terminals: Garden City Terminal and Ocean Terminal. Garden City Terminal is the fourth busiest container handling facility in the United States, encompassing more than 1,500 acres and moving in excess of 5 million TEU’s (twenty-foot equivalent units) in the last year of containerized cargo.

In addition to EV charging, the Port Fuel Center, which opened this month, is an innovative, state-of-the-art food and fueling facility for drayage and freight operators in and around the Port of Savannah. The center features live digital monitors displaying up-to-the-minute stacking at each of the port interchange gates, overnight parking for up to 80 trucks, EV shuttle service, a medical facility, an onsite truck repair facility, outdoor handwashing stations, showers, trucker paperwork drop boxes, fresh and prepared foods, a Wendy’s® restaurant with drive thru access, 16 gasoline pumps, 10 DEF diesel lanes, and 3 fuel lanes for Compressed Natural Gas.

“The Savannah Port Fueling Center is a prime example of our commitment to economic expansion, job growth, a more sustainable future, and our customers. We are thrilled to be partnering with Go-Station in making such a significant contribution to Savannah and EV transportation with a center near the largest and fastest-growing container terminal in America,” Sean Register, Managing Director of the Fuel Center, says.